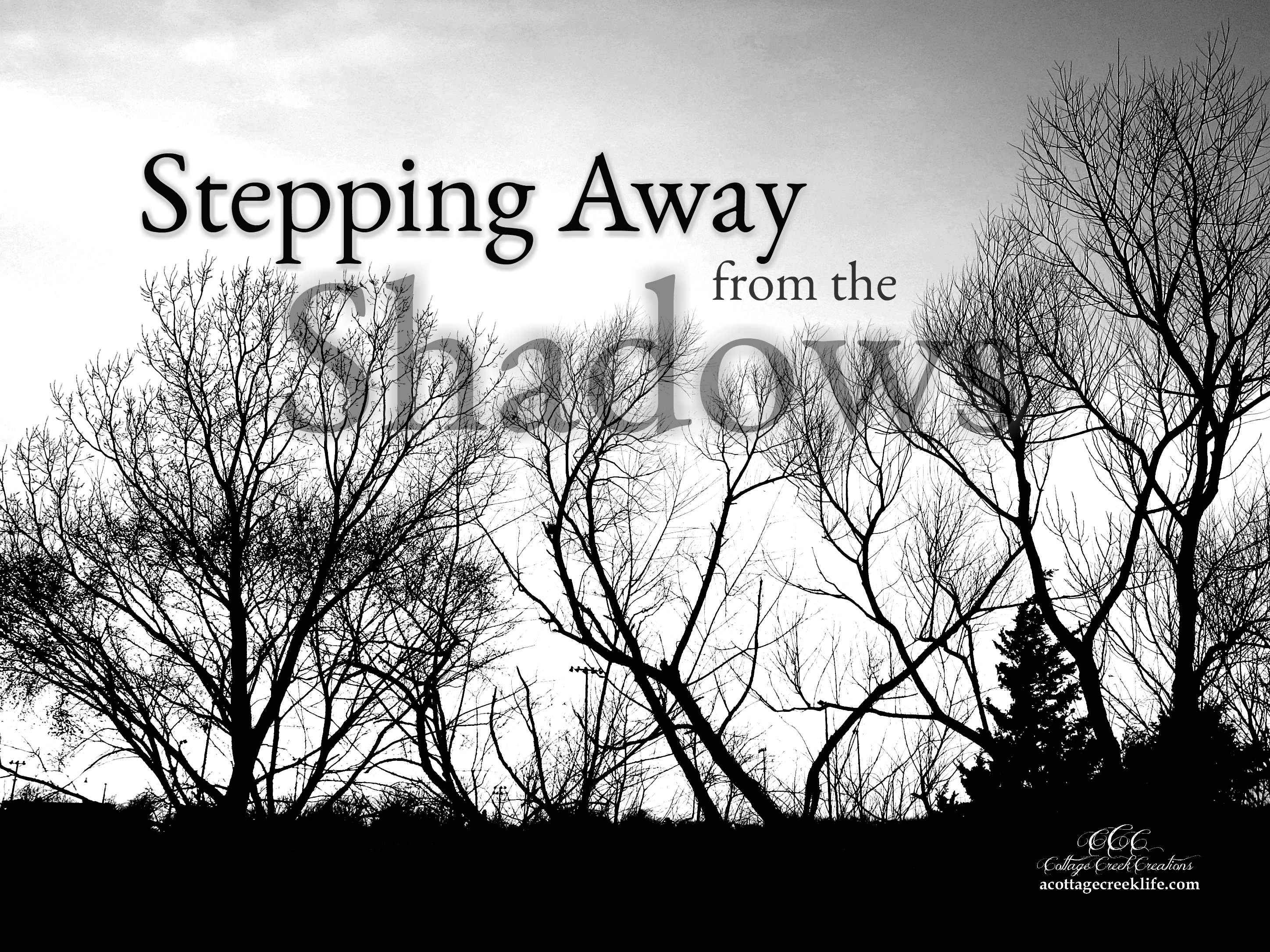 As the credits rolled, my outrage turned to fear…an almost panic level kind of fear.  The new “documentary” series, around the plight of people who struggle with poorly understood chronic illnesses, had felt more like an exploitative, caricature-like version of what (in reality) is an extremely grim existence for many chronically ill people.  Perhaps, if I had not been forced into the arena of chronic illness to fight my own personal battle, I would have walked away from the viewing experience with a much different perspective.  The program had flipped a switch inside my memory stores, and I felt the full emotional impact.  Painful, personal struggles that centered around other’s misperception around my chronic illness came flooding back.  Full realization of the influencing power by media (over cultural thought) sent a surge of panic, as I turned off the set.

From my mind’s eye, I watched the distressing scenes unfold.  I began to relive some of the difficult interactions during the early days of my illness.  A few of those around me had simply not understood the reality of my fight.  I couldn’t fault them for that.  How could they have possibly understood?  I would not have understood, had I not been hurled into its epicenter.

As the old memory reels played, I saw myself shrink into the fringes of self-imposed obscurity to quietly fight the epic battle for my life.  Facing down the harsh judgments had loomed large and seemed formidable.  I simply did not have the energy, nor was I emotionally equipped to deal with it at the time.  So I chose to quietly meet each remaining challenge from the safety of the shadows.

The incredible power that media holds over cultural thought is undeniable.  Each production is carefully crafted to serve an intended agenda.  Whether we realize it or not, we are influenced by what we see on the screen.  Judgments are formed as a result.  The final box office product can be useful for promoting educated, fair-minded, and compassionate cultural thought…or it can take the collective spirit of a people by the hand and walk it backward, into the dark recesses of ignorance, callousness and chaos.  It can (and often does) provide rich fodder for cultural bias against groups of people, along with mass indifference to the suffering of others.  But the truth is, with or without help from the media, people can (and do) form strong opinions and false judgments.  And then they act accordingly.

Human nature seems to be fraught with the desire to stand in judgement of people around their unique experiences of life.  Often, we huddle up with a group of like-minded others around inaccurate conclusions that are based on assumption.  The group dynamic lends imagined credence (and justification) to unkind attitudes and actions.  Forward movement toward deeper understanding and compassion comes to a halt.  As individuals, we are hardly in a position to assess the validity of someone else’s experience of life…yet it happens.  A lot.  And it’s happening, now, around the chronically ill.

There is a wide-spread, fast-growing community of people who quietly suffer with debilitating and grossly misunderstood chronic illnesses.  The forms of those chronic illnesses are varied and numerous, yet the effects are devastatingly similar.  Lives are impacted in ways that are inconceivable to those who are fortunate enough to have side-stepped that particular brand of medical malady.  More often than not, the symptoms compile a long list and the extreme, constant, physical assault has a multi-faceted crippling effect.

In addition to the physical suffering, many find it difficult to engage a physician who has the knowledge necessary to see the patterns that emerge from the long list of symptoms.  The long list is not seen as unified holistic evidence which points to dysfunction between the body’s critical systems.  Instead, individual symptoms become the focus.  Diagnostic tests are ordered, in an effort to address specific symptoms.  More often than not, a “normal” test value returns.  Often, the patient is sent on a wild goose chase, to visit a multitude of specialists, who order a myriad of tests which come up empty.  Many times, the patient is written off as being “depressed”.  It seems to be lost on many health care professionals that the depression (which may be a valid observation) is yet another symptom, rather than the cause of the illness.  Patients are dismissed or even treated with disrespect by healthcare providers, who simply lack the ability to make a correct diagnosis.  Those unfortunate patients are left to endure great physical suffering, amid confusion and hopelessness.

As if the physical trauma and the lack of medical support is not challenging enough, there is another looming issue among many who are chronically ill.  Irrational feelings of shame and guilt are carried like twin weights, as a direct result of insensitive attitudes stemming from uneducated judgments.  Years ago, I heard desperation in my voice as I sobbed to a friend, “Why do I have to have the WEIRD illness that makes no sense and looks so crazy?!”.  Each unkind, dismissive comment and raised eyebrow had heaped heavy weight upon my already burdened shoulders, causing great confusion and angst.

Negative interactions from misjudgments can cast doubt and fear in the minds of those who are already exhausted and suffering, causing them to question their own reality.  Ironically, the experiences of the chronically ill are truer than anyone on the outside of the experience could possibly imagine.  But, fear is masterful at spreading its dark, ominous cloud of falsehood over reality, while convincingly casting itself in the starring role as Truth.  When that happens, sad things follow. Tragically, when one who is chronically ill accepts the misperceptions of others (who have judged the illness to be a psychological manifestation) it can result in shutting down the search for answers, ending all possibility of finding a legitimate pathway toward healing.

Amid the insensitive few, there were also many people in my life who, although they did not understand the nuance of my experience, were full of compassion and loving support.   Those people were a lifeline for me… a true light in the darkness.  They still are!  They are the same people who continue to offer sympathetic support around the unconventional (and often inconvenient) lifestyle demands, which my particular chronic illness requires for the continued maintenance of my good health.  I count those beautiful people among my greatest blessings. Sadly, there are many chronically ill individuals who struggle in utter solitude.  They fight from the shadows without the healing benefit of even a glimmer of the therapeutic light that radiates from lovingkindness and sympathetic support.

It wasn’t until I found healing that I was able to process through the emotional battle scars and deal with the lingering, secret sense of shame around my struggle with chronic illness.  Thankfully, I was able to eventually break free of the emotional roadblocks, overcome my fear, step out of the shadows, and begin to tell my story to whomever would listen.  But randomly, (as in the aftermath of viewing the recent exploitive “documentary”) present day experiences will temporarily threaten to hurl me back into the shadows.  When that happens, I remind myself of the truth…and the importance of sharing that truth with others.

There is value in the stories of every, single, chronically ill person.  And they need to be told.  But, they need to be told in their purest form, unadulterated by writers who see dollar signs at the end of shock value.  Locked within those stories is potential for an end result that far outweighs any monetary reward.  I believe that the truth in those genuine, personal accounts will someday function as a catalyst for freedom (and life!) for a multitude of people who are secretly and silently fighting from the shadows.

Many will suffer for years and then die, never knowing that the key to their life had lain in something as simple as avoiding mold.  Or changing their diet.  Or by embracing any number of strategies that sound too simple to be believed.  Yet there are stories, like my own, which serve as proof that it is possible to find the illusive answers that can pull someone from the edge of destruction, back into life.

Those of us, who have fought the fight and braved the course, must purposefully step away from the shadows, stand tall, and speak the truth. In the end, I believe it will be through our stories that people will begin to connect their own dots and demand a shift from mainstream cultural and medical misperceptions.  Our shared struggle for validation will simply become another blip in medical history -like so many other very real, very treatable illnesses whose seeds were planted in ignorance, controversy and disbelief, yet eventually blossomed into standard practice.

The truth will ultimately prevail. I have to believe that!

Although this is not a blog site with the specific focus on chronic illness, it is a topic that I will continue to write about frequently.  Life with chronic illness is unrelenting, until the root is discovered and the course is corrected.  There is hope.  And help.  The struggle is real, and it can take some time to find specific, targeted pathways of healing for individuals.  In the midst of my darkest days, I decided that if I were ever able to climb up out of the dark valley of the shadow of death, I would stand, shouting the truth of my experience from the mountaintop!  My truest desire is to offer encouragement, help and hope to others, who are still wandering in their own dark valleys.

I’m working on an in-depth report that encapsulates the top healing strategies that worked for me.  It will be ready to share very soon.

There is also another piece in the works (and almost complete) around the neuropsychological aspect of mold toxicity via the inflammatory neurological effects of toxic mold poisoning.

By subscribing to the blog with your email, you will be notified of all newly published articles.  The subscription form can be found at the top or the bottom of this post.

Other related articles from A Cottage Creek Life:

2 Replies on “Stepping Away From the Shadows”